Python is an object-oriented language and almost every entity in Python is an object, which means that programmers extensively use classes and objects while coding in Python. Objects in Python are basically an encapsulation of Python variables and functions that they get from classes.

In this module, we will learn each aspect of classes and objects in Python in the following order:

So, without further delay, let’s get started.

Watch this video on “Python Classes and Objects”:

Go for the most professional Python Course Online in Toronto for a stellar career now!

What is an Object in Python?

Python is a programming language that focuses on object-oriented programming. In Python, almost everything is an object. We can check if the python is an object using the type(). It is just a collection of variables and Python functions. There are various types of objects in Python such as Lists, dictionaries, files, sets, strings and etc. An object is defined by its class. For example, an integer variable is a member of the integer class. An object is a physical entity. The properties of an object are as follows. State, Identity, and behavior are the three key properties of the object.

The definition of Python class is simply a logical entity that behaves as a prototype or a template to create objects. Python classes provide methods that could be used to modify an object’s state. They also specify the qualities that an object may possess.

All object instances of a class share a Python class variable. When a class is being created, variables are defined. They aren’t defined in any of a class’ methods.

Example of Python Classes and Objects

Let’s take an example to understand the concept of Python classes and objects. We can think of an object as a regular day-to-day object, say, a car. Now as discussed above, we know that a class has the data and functions defined inside of it, and all this data and functions can be considered as features and actions of the object, respectively. That is, the features (data) of the car (object) are color, price, number of doors, etc. The actions (functions) of the car (object) are speed, application of brakes, etc. Multiple objects with different data and functions associated with them can be created using a class as depicted by the following diagram. 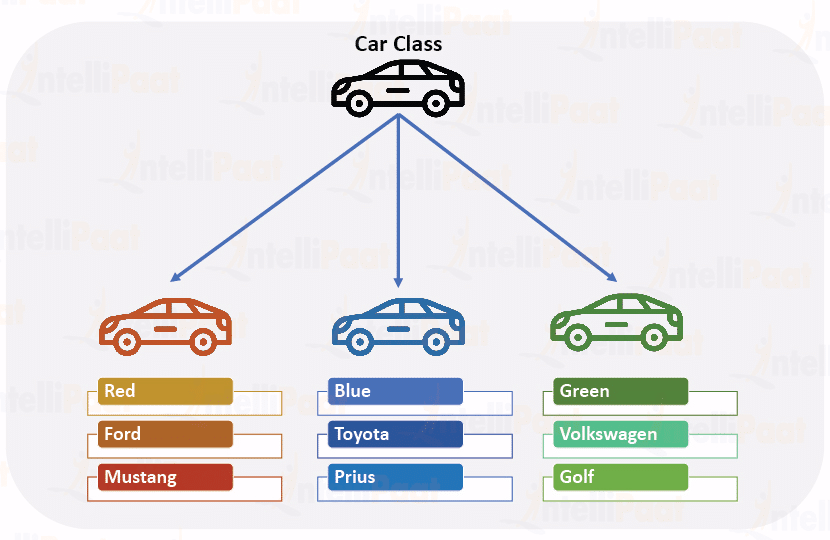 Advantages of Using Classes in Python

Become a Professional Python Programmer with this complete Python Training in Singapore!

Much similar to functions, we use docstrings in classes as well. Although the use of docstrings is not mandatory, it is still recommended as it is considered to be a good practice to include a brief description of the class to increase the readability and understandability of the code.

The following example illustrates how to define a class in python:

The create class statement will create a local namespace for all the attributes including the special attributes that start with double underscores (__), for example, __init__() and __doc__(). As soon as the class is created, a class object is also created which is used to access the attributes in the class, let us understand this with the help of a Python class example.

Creating an Object in Python

We must notice that we are using a parameter named self while defining the function in the class, but we’re not really passing any value while calling the function. That is because, when a function is called using an object, the object itself is passed automatically to the function as an argument, so object1.function1() is equivalent to object1.function1(object1). That’s why the very first argument in the function must be the object itself, which is conventionally called ‘self’. It can be named something else too, but naming it ‘self’ is a convention and it is considered as a good practice to follow this convention.

Modifying and Deleting an Object

You can delete an object by using del keyword

Types of Classes in Python

There are various types of classes in Python in which some are as follows:

An abstract class is a class that contains one or more abstract methods. The term “abstract method” refers to a method that has a declaration but no implementation. When working with a large codebase, it might be difficult to remember all classes. That is when a Python Abstract class can be used. Python, unlike most high-level languages, does not have an abstract class by default.

A class can be defined as an abstract class using abc.ABC, and a method can be defined as an abstract method using abc.abstractmethod. The abbreviation for abstract base class is ABC. The ABC module, which provides the foundation for building Abstract Base classes, must be imported. The ABC module operates by decorating base class methods as abstract. It installs concrete classes as the abstract base’s implementations.

The partial class is one of the python classes. We can use it to develop a new function that only applies a subset of the statements and keywords you pass to it. You can use partial to freeze a chunk of your function’s statements and/or keywords, resulting in the creation of a new object. We can use the Functools module to implement this class.

The Python file object offers access to and manipulation of files through methods and properties. We can read and write any file by using file objects.

Python produces a file object anytime we open a file to conduct any operations on it. We can use Python’s built-in functions, such as open() and os.popen, to generate a file object ().

When a file object is misused or a file action fails due to an I/O-related issue, the IOError exception is thrown.

A file object can be classified into three categories, text files, binary files, and raw files.

In python classes, “__init__” method is reserved. It is automatically called when you create an object using a class and is used to initialize the variables of the class. It is equivalent to a constructor.

Following example illustrates how to use the __init__() function:

In the above example, the init function behaves as a constructor and is called automatically as soon as the ‘object1 = IntellipaatClass(“Python”)’ statement is executed. Since it is a function inside a class, the first argument passed in it is the object itself which is caught in the ‘self’ parameter. The second parameter, i.e., course, is used to catch the second argument passed through the object, that is ‘Python’. And then, we have initialized the variable course inside the init function. Further, we have defined another function named ‘display’ to print the value of the variable. This function is called using object1.

Note: Don’t forget to give proper indentation in the above code.

Python Inheritance and Its Types

As a result of being an object-oriented programming language, Python also utilizes inheritance. The ability of a class to inherit the properties of another class is known as inheritance. The class that inherits the properties is usually called a subclass or a derived class. And, the class that is being inherited is known as a superclass or a base class.

Inheritance provides code reusability as we can use an existing class and its properties rather than creating a class from scratch with the same properties.

There are different forms of inheritance depending on the structure of inheritance taking place between a derived class and a base class in Python. Let’s discuss each one of them individually:

Private Attributes of a Class in Python

While implementing inheritance, there are certain cases where we don’t want all the attributes of a class to be inherited by the derived class. In those cases, we can make those attributes private members of the base class. We can simply do this by adding two underscores (__) before the variable name.

When the above code block is executed, it will give the following error:

Since y is a private variable in the base class, the derived class is not able to access it.

Polymorphism means having many forms. Polymorphism enables using a single interface with different Python data types, different classes, or even a different number of inputs.

Polymorphism is of two types:

Method overriding allows us to change the implementation of a method in the child class that is defined in the parent class.

To override a method the following conditions must be met:

By using method overloading, you can implement the same functionality of the class with different parameters. Python does not support compile-time polymorphism but there is a workaround like an example below.

Mutable and Immutable Objects in Python

An immutable object is an object whose state can never be modified after it is created.  Int, float, complex, Python string, tuple, frozen set, and bytes are immutable.

With this, we come to the end of this module in Python Tutorial. Now, if you want to know how python is used for data science, you can go through this blog on Python Data Science tutorial.

Further, check out our offers for Python Certification Course and also refer to the trending Python interview questions prepared by the industry experts.