Variables form to be the most important aspects of any programming language as they are foundational and widely used for various purposes. This Python tutorial will help you understand everything about Python variables. Concepts such as the variable declaration, usage of local and global variables, and more are covered here to give you insight into variables in Python.

What is Variable in Python?

In this module, we will learn all about variables in Python. Following is the list of all topics that we are going to cover in this module: 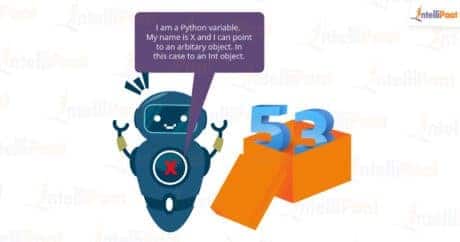 Python does not have a specific command just to declare or create a variable; however, there are some rules that we need to keep in mind while creating Python variables.

A variable in Python is created as soon as we assign a value to it. Python also does not require specifying the data type of the variable, unlike other commonly used programming languages.

There is no need for an explicit declaration to reserve memory. The assignment is done using the equal to (=) operator.
Example:

We can assign a single value to multiple variables as follows:

Also, we can assign multiple values to multiple variables as follows:

Note: Python is a type inferred language, i.e., it automatically detects the type of the assigned variable.

Watch this video on ‘Variables in Python’:

Re-declaring a Variable in Python

A constant is a type of variable that holds values, which cannot be changed. In reality, we rarely use constants in Python. Constants are usually declared and assigned on a different module/file.
Example:

Then, they are imported to the main file.

Further, take a look at our Python Course and prepare to excel in your career with our free Python interview questions created by the experts.

Here, the variable lang_name is given the value “python”.

In Python, ‘Private’ instance variables that can’t be accessed except inside an object, do not practically exist. But most Python coders use two underscores at the beginning of any variable or method to make it private.

A variable __intellipaat will be treated as a non-public or a private variable.

How to get the types of Variables in Python

You can get the data type of a variable with the type() function.

Scope of Variables in Python

Learn end-to-end Python concepts through the Python Course in Hyderabad to take your career to a whole new level!

On the other hand, the global variable in Python is a variable that can be used globally anywhere in the program. It can be used in any function or module, and even outside the functions, without having to re-declare it.
Example:

Python provides a feature to delete a variable when it is not in use so as to free up space. Using the command del ‘variable name’, we can delete any specific variable.
Example:

If we run the above program, the Python interpreter will throw an error as ‘NameError: name a is not defined’ in the second print (a), since we have deleted the variable a using the del a command.

Here, this block of code will throw a TypeError as variable a is a string type and variable b is a number type. To remove this error, we will have to declare the number variable as a string variable as shown in the example below:

This brings us to the end of this module in Python Tutorial.

Now, if you are interested in knowing why python is the most preferred language for data science you can go through this Python Data Science tutorial.