This module of the Blockchain tutorial focuses on blockchain forks. We shall discuss the occurrence of forks, their types, differences between them, and examples pertaining to different types of blockchain forks.

The following are the topics that will be discussed in this blog:

What is a Blockchain Fork?

For a technology that is as sophisticated as blockchains, it is not wrong to say that the technology adheres to numerous limitations. With issues such as propagation delays, which refers to lag time between nodes sending and receiving data, transactions getting lost while being transmitted to receivers, and nodes going bad and transmitting false information, stakeholders were in pursuit of apt technological renovations that would improve the performance of blockchains altogether.

A fork is a change to the blockchain protocol. It is essentially a divergence from the previous version of blockchain.

The decentralized nature of public blockchains means that the participants on the network must be able to come to an agreement as to the shared state of the blockchain. The unanimous consensus among the network nodes results in a single blockchain that contains verified data that the network asserts to be correct.

However, many times, the nodes in the network cannot come to a unanimous consensus regarding the future state of the blockchain. This event leads to forks, meaning that it leads to a point in which the ideal single chain of blocks is split into two or more chains, that are all valid.

There are two types of forks: 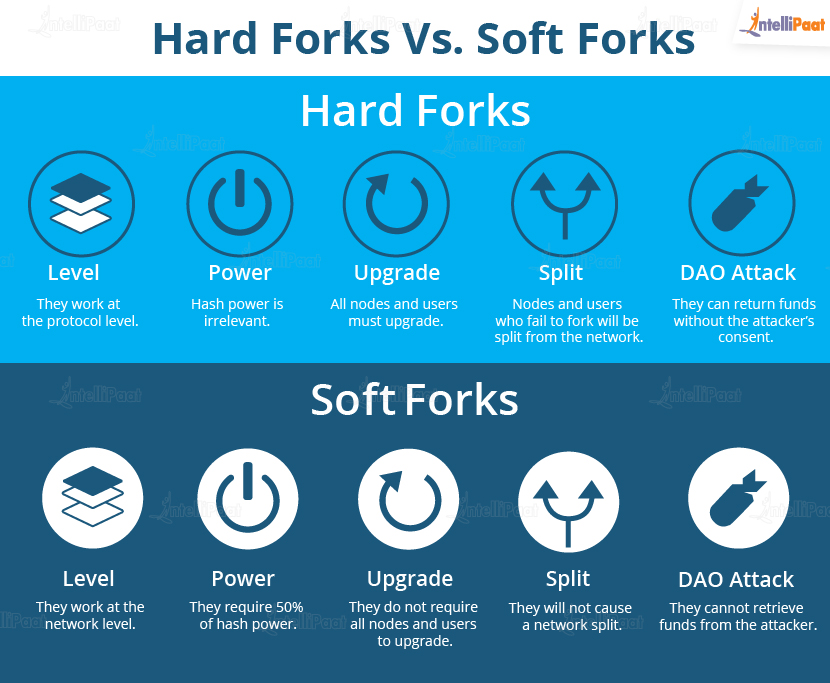 When there is a change in the software that runs on full nodes to function as a network participant, the new blocks mined based on the new rules in the blockchain protocol are not considered valid by the old version of the software. When hard forks occur, new currency comes into existence. An equivalent quantity of currency is distributed to the full nodes that choose to upgrade their software so that no material loss occurs. The final decision to join which chain rests with the full nodes. If the full nodes choose to join with the new chain, the software is upgraded to make newer transactions valid, while the nodes that do not choose to upgrade their software continue to work the way they used to work.

When there is a change in the software that runs on full nodes to function as a network participant, new blocks are mined based on new rules in the blockchain protocol and are also considered valid by the old version of the software. This feature is also called backward compatibility.

Example: Suppose, there is a new update in the Ethereum blockchain in which the consensus protocol will change from a type of proof-of-work to a type of proof-of-stake. The full nodes that will install the update will use the new consensus protocol, and the ones that choose not to install the update will still stay compatible with the other nodes in the blockchain.

Want to learn Blockchain from top experts, then enroll in Blockchain Courses in Bangalore.

Why is it Important to Know About Blockchain Fork?

When there is an upgrade and it is incompatible with the older version of the blockchain, a fork will form. It is important to know about blockchain fork because whosoever does not upgrade it will be left behind an old version of the chain, which is completely useless now. If a large number of developers are in favor of an upgrade, then it can be done easily.

Why and How do Blockchain Forks Occur?

There are three major reasons why blockchain forks occur:

Check out our offer for the online Blockchain Certification Course. Also, take a look at our blog covering Blockchain Interview Questions.