Home / Tutorial / What is Ripple Blockchain?

What is Ripple Blockchain?

Mounted on top of a distributed open-source protocol, Ripple Blockchain technology supports tokens that represent fiat currency, cryptocurrency, commodities, and other units of value such as frequent flyer miles and mobile minutes. This system aims at the enablement of secure, instant, and nearly free global financial transactions of any size with no transaction charges

Check this Blockchain video by Intellipaat

PS: Ripple Blockchain as a cryptocurrency is represented as XRP.
Acting both as a cryptocurrency and as a digital payment network for financial transactions, Ripple Blockchain uses a common ledger that is managed by a network of independently validating servers that constantly compare transaction records. It works on a shared public database that incorporates a consensus process for decision-making and validating servers to ensure integrity. The servers can belong to anyone from banks to individual users. 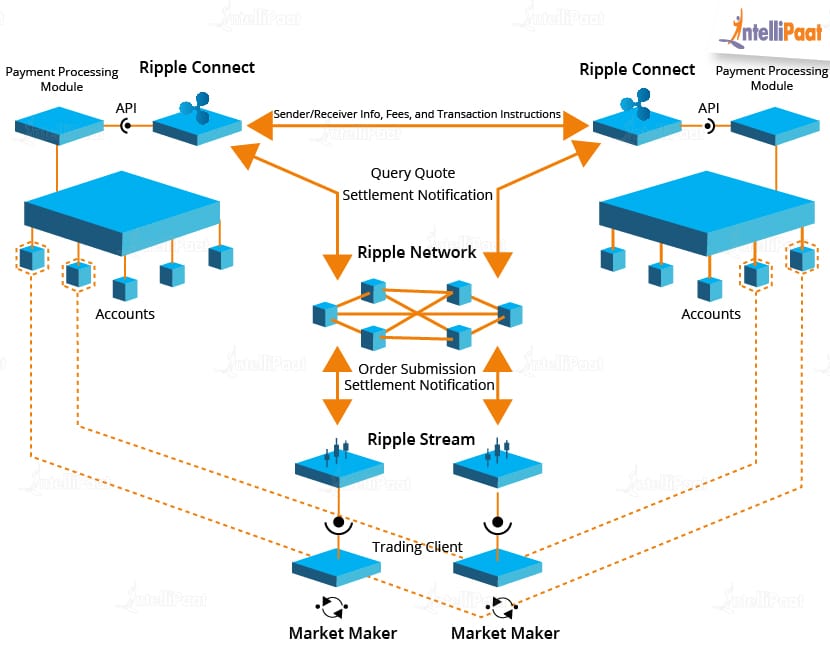 To understand how the Ripple Blockchain system functions, consider a money transfer structure where two parties on either end of the transaction use preferred middlemen to receive money. Say, Mr. X needs to send $100 to Mr. Y who lives in a different city. He gives his local agent the money to send to Mr. Y with a password that David is required to answer correctly to receive the funds.

Mr. X’s local agent alerts Mr. Y’s agent of the transaction details—the recipient, funds to be reimbursed, and the password. If Mr. Y gives his local agent the right password, he receives $100. However, the money comes from the agent’s account which means that Mr. X’s agent would owe Mr. Y’s agent $100.

Mr. Y’s agent can either record a journal of all Mr. X’s local agent’s debt which the former would pay on an agreed day or make counter transactions for balancing the debt. For example, if Mr. X’s agent was also Mr. Z’s agent and Mr. Z needs to transfer $100 to Mr. Z1 whose agent is Mr. Y’s agent, this would balance out the $100 owed to Mr. X’s agent since Mr. Z1 will be paid from Mr. X’s local agent’s account.

Unlike banks that take days or weeks to complete a wire transfer, Ripple Blockchain does it in seconds. The fee to conduct transactions on Ripple Blockchain is minimal, with the minimum transaction cost for a standard transaction being 0.00001 XRP as opposed to the fees charged by banks for conducting cross-border payments.

Further, we have discussed more Ripple Blockchain in our Blockchain certification online courses.

What is Ripple Blockchain?