This part of the Blockchain tutorial includes the Blockchain cheat sheet. Here you will learn various aspects of Blockchain that are possibly asked in the interviews, understanding the most important blockchain terminologies, Blockchain workflow and more.

The world of blockchain and cryptocurrencies can seem daunting to anyone on the outside looking in. And with good reason too. There’s a lot of technical information around, as well as thousands of cryptocurrency companies, with more created every day. With such an overwhelming amount of information out there, where do you start?
Well, with that in mind, we’ve created an introductory, easy-to-digest cheat-sheet for anyone who wants to learn a little more about cryptocurrencies.

This cheat sheet is designed for the one who has already started learning about the Blockchain but needs a handy reference sheet.
Download a Printable PDF of this Cheat Sheet 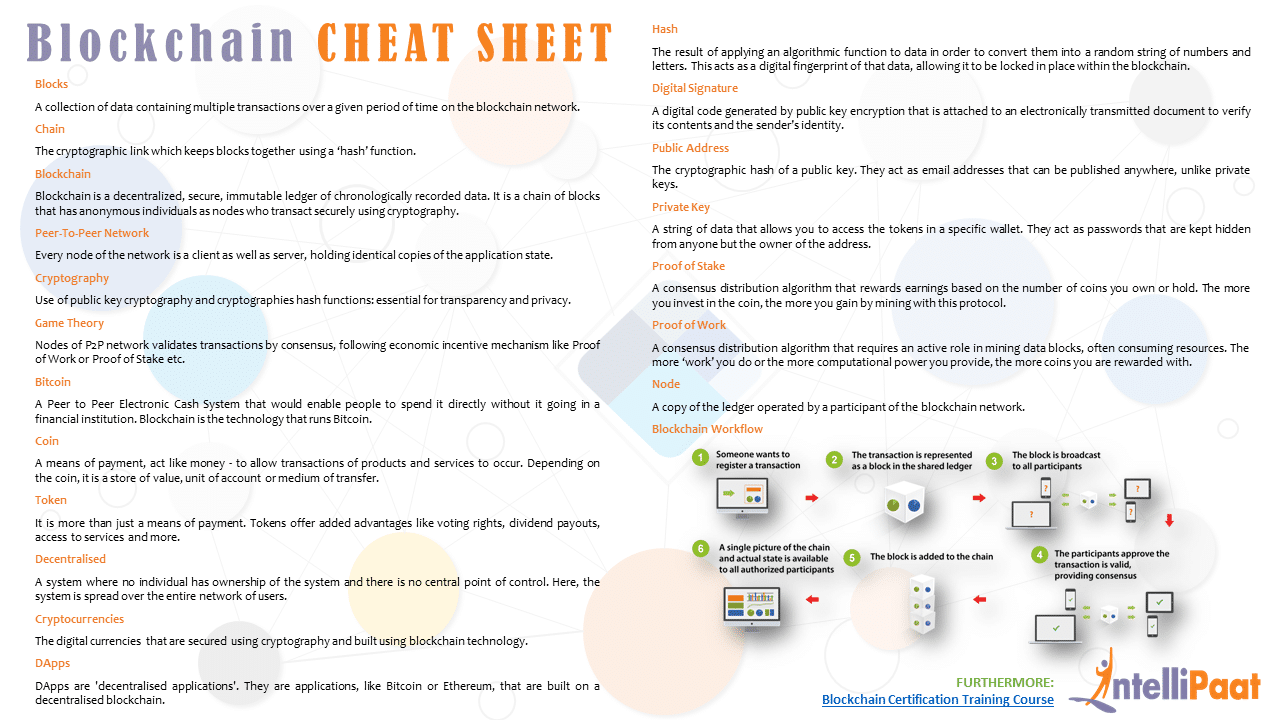 A blockchain is a secure, global, immutable public ledger that records every transaction, chronologically, on the network. The blockchain is the underlying technology upon which cryptocurrencies and DApps (more on them later) are built.
Blockchains update regularly, confirming transactions. Once a transaction has been confirmed and listed in the blockchain, it is impossible to change or tamper with. This makes blockchains extremely secure and highly resistant to fraudulent behavior or human error. Blockchain technology is set to disrupt industries all over the world in the coming years – especially industries where there are a high number of intermediary or third-party companies.
Some of the common terminologies of blockchain are as under:

With this, we come to an end of Blockchain Cheat Sheet. To get in-depth knowledge, check out our interactive, live-online Intellipaat Blockchain certification training Course here, that comes with 24*7 support to guide you throughout your learning period. Intellipaat Blockchain Certification Course offers the definitive training in the blockchain that includes blockchain programming – Solidity, ethereum, the concepts of distributed ledger, hyperledger, multichain, cryptocurrency, bitcoin mining, architecture, core layers, application and more. In this Blockchain course, you will work on real-world projects and case studies for hands-on experience.