Benefits of Blockchain & Problems with Blockchain

In this module of the Blockchain tutorial, we will cover the importance of blockchains, their need, specific points of applications, constraints associated with them, and their future. This module will overall help you understand the journey of blockchains to date and beyond.

Before we shed light on the benefits of Blockchain, let us invest some time in comprehending the need for blockchains in the first place. In this module, we shall also focus on the problems with blockchains and what is being done to mitigate those issues. In addition, we will also detail to you the future of blockchains.

Check this Blockchain video by Intellipaat:

Needs and Benefits of Blockchains

There can be hundreds of reasons why we need blockchain, and there can be a hundred further ways that showcase the benefits of blockchain. Owing to blockchain advantages, they can be used in cloud migration, education, digital IDs, voting, data sharing, and many other sectors due to the robustness they bring to the table. With anonymity, immutability, and security being their trademark features, blockchain has carved a niche in the marketplace. Once a function/code has been locked into a blockchain and passed through the server, it cannot be manipulated. Similarly, since the code/function can’t be tampered with, results do not fluctuate. Hence, it won’t be wrong to conclude that the benefits of blockchains are more than we can ever think of. 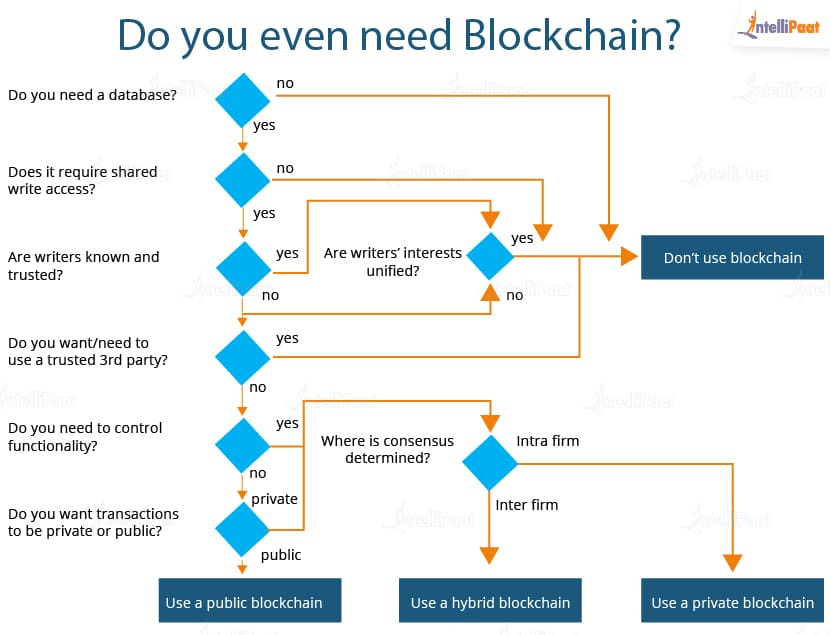 Today, across a plethora of verticals, globally acclaimed enterprises are traversing through the Blockchain applications to disrupt, transit, and renovate traditional business models. While numerous C-suite executives are still in pursuit of the right blockchain implementation, some of their kin have been able to successfully leverage the blockchain advantages. They are now able to revamp their revenue streams owing to many a benefit that blockchains offer, including greater transparency, enhanced security, improved traceability, increased efficiency and speed of transactions, and reduced operational costs. From global supply chains to financial services to healthcare, blockchain has the proclivity to revolutionize every industry. It is necessary to understand that blockchains are not just about digital currencies. There is a lot more to blockchain advantages. Numerous startups are implementing blockchains in their business models and are doing significantly well in terms of profitability and productivity. The most stand-out features of blockchains are transparency and security, companies are relying on this buzz technology without any haste.
Blockchain Technology offers neoteric tools for authentication and authorization in the digital world. These tools preclude the requisite for multiple centralized administrators. As a result, blockchain facilitates the creation of new digital relationships. By formalizing and securing new digital relationships, blockchain advantages are well poised to create the backbone of a layer of the Internet for transactional and value-based interactions. Blockchain brings flexibility by enabling multiple parties to write new entries into a system of records. Also, each record remains secure as it is held by many custodians. Any third-party entity can both review previous entries and record new ones. The blocks and the content within the blockchains are protected by powerful cryptography. In this way, blockchain allows a digital currency to maintain a trusted transaction network without relying on a central authority. It is for this reason that digital currencies are thought of as ‘decentralized.’ This decentralized approach makes blockchain the most secure technology ever invented, the reason why it is leveraged for conducting the most sophisticated forms of transactions.
But a few constraints do tag along with every technology. Blockchain is no exception.

Check this video on Hyperledger Fabric Blockchain by Intellipaat:

So, What Are the Problems that Are Associated with Blockchains?
Few IT professionals have pointed out that blockchains have become overhyped. The available versions of the technology have certain limitations and are in ways inappropriate for many digital interactions.

While we talk of building the digital backbone to the new transaction layer of the Internet, sometimes blockchains, private cryptographic keys, and cryptocurrencies should not be trusted blindly. We must never forget the fact that not only us but also hackers are getting laced with sophisticated and advanced technologies.

There are multiple issues that are resonant in the blockchain space.
Blockchain has made cryptography mainstream, but this highly specialized industry is occupied with jargon. Blockchain, being a complex technology itself, makes understanding cryptocurrency way too difficult. Additionally, blockchains are not much resistant to threats as they are ‘antifragile’.

They respond to attacks and grow stronger; however, in today’s marketplace, blockchains are not getting the optimum exposure that would make them strong. If a blockchain implementation is not done in a robust network with a widely distributed grid of nodes, it becomes extremely formidable for organizations to stay productive throughout.
For a blockchain to be used as a database, the information going into the database needs to be of high quality. The data stored on a blockchain is not inherently trustworthy, so events need to be recorded accurately in the first place. In addition, there is one notable security flaw in Bitcoin Blockchain and other blockchains: if more than half of the computers working as nodes to service the network tell a lie, the lie will become the truth.
Considering these factors, a lot of discussions have been going on about improving the present blockchain technology. Innovators are dedicating their time and resources to mitigate the shortcomings that today’s blockchains are infused with. The problems with blockchains need to be dealt with.

Here’s How Blockchains Will Look Like in the Years to Come: Future of Blockchains
Time is steering in the forward direction, so are the developments and upgrades around the blockchain space. Major players in the financial space have been investing their resources for many years to improve the offerings of blockchains. Although the disadvantages of blockchains cannot be entirely ignored, it is not late for a new dawn in the blockchain world. All these investments have not gone in vain. The future of blockchain technology will offer a lot to all companies across all verticals.

Blockchain technology can be used to make cross-border payments in a much faster and cheaper way. While international remittance costs are around 20 percent generally, blockchains will allow the transfer of money at a mere remittance charge of 2 percent. Another powerful application of blockchains that is underway is ‘Smart Contracts’. A computer program basically, the Smart Contract can be used to administer all aspects of any agreement, from ideation to execution.
The most important use case of blockchain is Identity Management. In a world where users are struggling hard to manage identities on the Internet, blockchain has already demonstrated its efficacy as a game-changer. Thanks to the individual verification processes that take place throughout member computers on a computer network, blockchains are well poised to offer an unparalleled level of security. Also, blockchains are expected to further transform the cryptocurrency space. Blockchain advantages are countless.
Read everything about the benefits and importance of Blockchain. Now, check out the best tutorial to learn Blockchain by Intellipaat and claim your certification with the Blockchain course. Further, check the most frequently asked Blockchain interview questions with answers.

Benefits of Blockchain & Problems with Blockchain