This module of the Blockchain tutorial focuses on Hyperledger. It highlights Hyperledger’s inception story, its architecture, and various project frameworks and tools that are a part of the Hyperledger world.

What does ‘Hyperledger’ mean?

Neither a company nor a cryptocurrency and not a Blockchain, Hyperledger is a hub for open industrial Blockchain development. According to the official Hyperledger website, ‘Hyperledger is an open-source collaborative effort created to advance cross-industry Blockchain technology.

It is a global collaboration, hosted by the Linux Foundation, including leaders in finance, banking, Internet of Things, supply chains, manufacturing, and technology.’ Launched in 2015 by the Linux Foundation, Hyperledger was developed to create an environment in which disparate communities of software developers and companies meet and coordinate to build Blockchain frameworks. 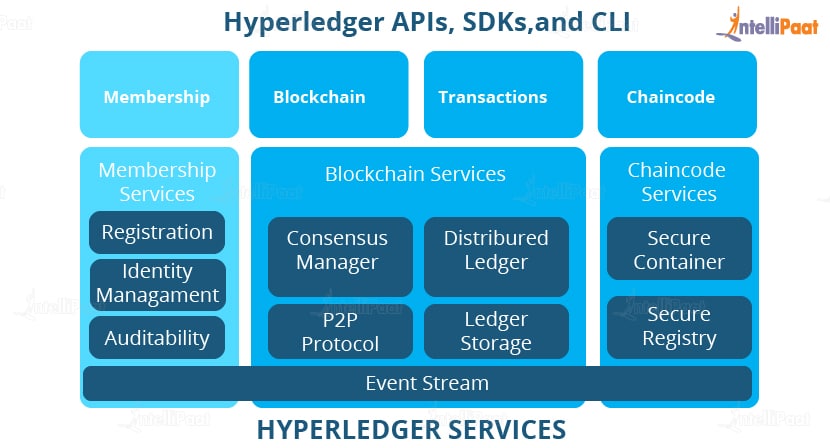 All Hyperledger projects follow a methodology that includes an approach, interoperability, and highly secure solutions, and it helps in the development of easy-to-use application programming interfaces (APIs). The architecture of Hyperledger comprises the following business Blockchain components:

Want to become a certified professional? Check out our Blockchain Course!

An umbrella project of open-source Blockchain frameworks and related tools, Hyperledger supports big industry players to support the collaborative development of Blockchain-based distributed ledgers. Hyperledger has been responsible for certain projects. They are listed down for your reference:

Contributed by Monax and sponsored by Intel, Burrow is a Blockchain client that develops a permissible smart contract machine, along with the specification of Ethereum Blockchain.

Originally contributed by Intel, Hyperledger Fabric is a permissioned Blockchain infrastructure that provides a modular architecture with a delineation of roles between nodes, execution of smart contracts also known as chain codes, configurable consensus, and membership services.

Hyperledger Fabric is aimed at integration projects in which a distributed ledger technology is required, offering no user-facing services other than SDK for Node.js, Java, and Go. It supports chaincode in JavaScript and Go and is, therefore, more flexible than its competitors who support only one closed smart contract language.

Contributed by Soramitsu, Iroha is the project of a couple of Japanese companies that focus on mobile applications aimed at creating an easy-to-incorporate framework for Blockchains.

A plethora of tools exist for building Blockchain applications in Hyperledger. Here’s a detailed list pertaining to their descriptions and specific use cases.

One can check the system status, adjust chain numbers, scale resources, and pull off several important yet difficult tasks through dashboards provided by the toolkit. The life cycle of Blockchains can also be managed using this tool. Provided that you are an infrastructure engineer, Hyperledger Cello is your go-to tool for managing Blockchain networks from an IT perspective.

Primarily, this tool facilitates the transfer of value or interoperability across distributed and non-distributed ledgers. Using Hyperledger Quilt, a user who is registered with one Blockchain network can securely transfer values to another user who is registered on another Blockchain network. Based on the Interledger Protocol (ILP), this tool supports routing payments across different digital asset ledgers while isolating senders and receivers from the risk of intermediary failures. PS: It is yet to be released.

This tool is an explorer, the features and functionalities of which can be leveraged to view, invoke, deploy, or query blocks, transactions and associated data, network information, chain codes, and transaction families.

Hosted by the Linux Foundation itself, Hyperledger Caliper is a Blockchain benchmark tool that allows users to scale the performance of specific Blockchain implementations with a set of predefined use cases. This tool produces reports that include performance indicators. The results of these indicators can be used by other Hyperledger projects to build and deploy case-specific frameworks.