Here, you will learn about the blockchain background. We shall discuss Merkle trees and skim through the ideation of blockchains from Merkle trees. Also, this is where you will read about Satoshi Nakamato.

Let’s look at the topics we’ll be covering in this blog:

In 1991, when Stuart Haber and W. Scott Stornetta wanted to implement a system where document timestamps could not be tampered with, they ideated the concept of a cryptographically secured chain of blocks. The following year, they collaborated with Bayer to incorporate Merkle trees or Hash trees, and this was the first instance in the history of blockchain.

PS: ‘Merkle Tree’ was named after Ralph Merkle who patented them for the first time in 1979. 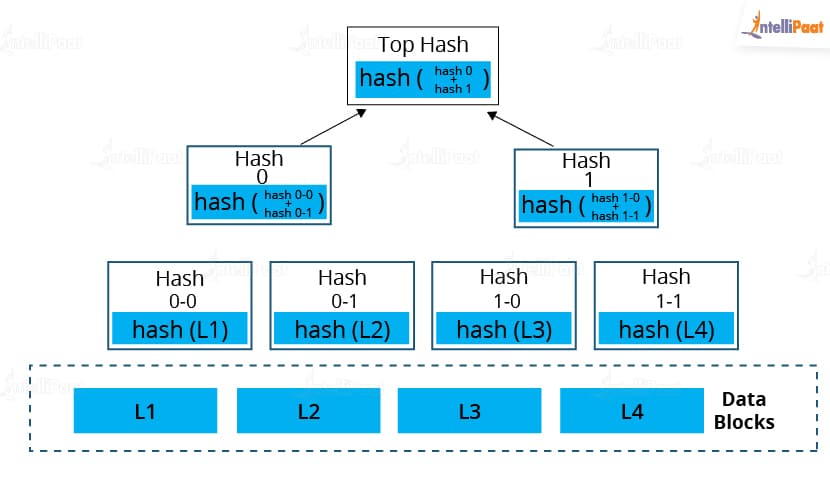 An example of a binary hash tree. Hashes 0-0 and 0-1 are the hash values of data blocks L1 and L2, respectively, and hash 0 is the hash of the concatenation of hashes 0-0 and 0-1.
Recursively defined as a binary tree of hash lists where the parent node is the hash of its children, and leaf nodes are hashes of the original data blocks, Merkle trees are the first instance of any blockchain implementation. Merkle trees are used to create a ‘secured chain of blocks’—a series of data records, each connected to the one before it. The newest record in this chain would contain the history of the entire chain. This is the blockchain background.

Check this video on Hyperledger Fabric Blockchain by intellipaat:

Further in 2008, an individual (or a group of individuals) that go by name Satoshi Nakamato conceptualized the theory of distributed blockchain and laid the blockchain background. Improving the design in a unique way to add blocks to the initial chain without requiring them to be signed by trusted parties, Nakamato revolutionized the whole space.

The modified trees would contain a secure history of data exchanges, utilize a peer-to-peer network for timestamping and verifying each exchange, and could be managed autonomously without a central authority. The improvements made by Nakamato were so rudimentary and beneficial that blockchains have now become the backbone of cryptocurrencies. Today, the design serves as the public ledger for all transactions in the cryptocurrency space. 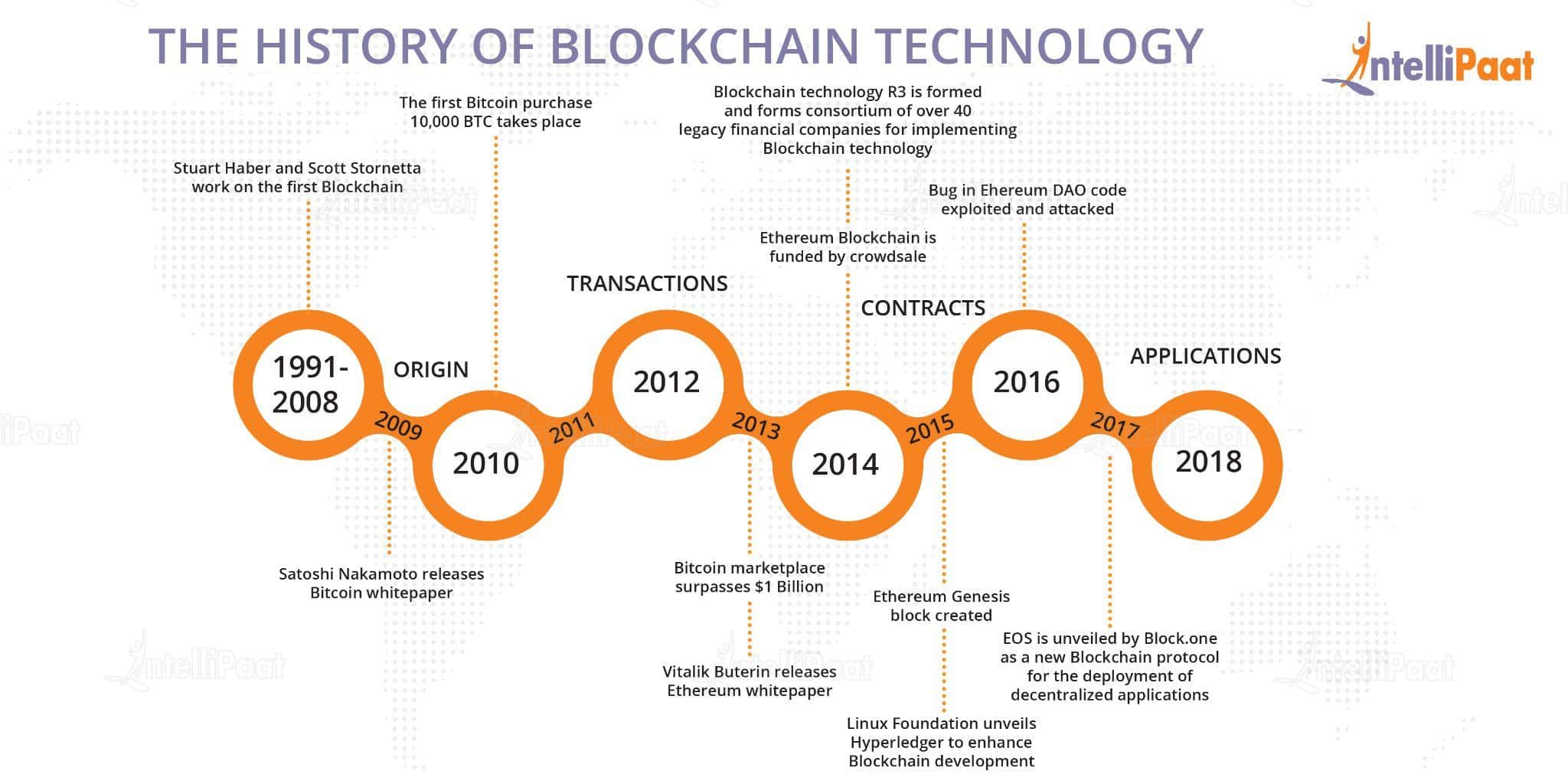 As we’ve already mentioned before, Blockchain was envisioned by Stuart Haber and W. Scott Stornetta in 1991. They started by working on a chain of blocks that were secured by cryptography. The timestamps of the documents couldn’t be tampered with. Merkle trees were incorporated into the system in 1992. This helped make the system more efficient and now more documents could fit in one block.

But Blockchain only started becoming relevant in 2008, because of Satoshi Nakamoto. Often called the brains behind this technology, Satoshi Nakamoto’s identity remains a mystery even now. Nakamoto is credited with conceptualizing the first Blockchain Technology in 2008. Since then the technology has been constantly evolving and found its way into applications other than cryptocurrency.

Bitcoin came into being in 2008 as the first application in the History of Blockchain Technology. Since this was also when Bitcoin Blockchain started gaining popularity, a lot of people confuse Bitcoin and Blockchain as the same thing.

In 2009, Satoshi Nakamoto released the first whitepaper on Blockchain Technology. In this paper, they explained Blockchain as an electronic peer-to-peer system. Nakamoto had formed the first block or the genesis block, from which other blocks were mined. These blocks were interconnected, forming one of the largest chains of blocks carrying different information.

As Bitcoin started gaining popularity, a lot of other applications emerged that came up along with the evolution of Blockchain Technology.

A developer by the name of Vitalik Buterin was a little too concerned about Bitcoin’s limitations. According to him, Bitcoin wasn’t able to take proper advantage of Blockchain Technology. So, he started working on a blockchain that wouldn’t be just limited to peer-to-peer technology. Ethereum was developed as a new public blockchain in 2013. It had added functionalities.

Buterin distinguished Ethereum from Bitcoin by adding another function unique to it, which lets users record assets such as slogans. Now, Ethereum could also be a platform for developing decentralized apps, rather than just being a cryptocurrency. This proved to be a milestone in Blockchain Technology’s history.

Ethereum Blockchain was officially launched in 2015 and since then, it has become one of the biggest applications in Blockchain Technology. It boasts of being capable of handling the most amount of transactions in a day, owing to its ability to support both decentralized apps and smart contracts.

In the last few years, a lot has been done on Blockchain Technology. A lot of new projects have come up with the aim of benefitting from the technology.

NEO, the first open-source, decentralized, Blockchain platform was launched in China. The country has blocked cryptocurrencies but it remains actively invested in Blockchain technology development. NEO is touted as the Ethereum of China.

Some developers used Blockchain Technology to help in the development of the Internet of Things. This led to the release of IOTA, a cryptocurrency platform that is specially designed for the Internet of Things ecosystem. It provides no transaction fees and employs unique processes for verification.

Sounds interesting? Check out the best Blockchain tutorial by Intellipaat and claim your certification with Blockchain Training Course.

We just took you through the entire history of Blockchain and the important phases along the way. With the development of Blockchain Technology in recent years, more and more companies are hiring Blockchain professionals. They are looking to implement Blockchain to take advantage of the Blockchain applications. If you’re wondering whether you want to get into Blockchain, this is the right time. The future of Blockchain technology is very bright.