Hyperledger is a cooperative project for Blockchains created to improve Blockchain technology within the industry. It is mainly used to enhance cross-industry technologies. This section of the Blockchain tutorial includes different aspects of Hyperledger Blockchain and the working of Hyperledger, including what the consensus algorithm is. You will also learn about the Hyperledger frameworks such as Hyperledger Indy, Iroha, and Fabric as well as tools, such as Cello, Composer, and Explorer.

Hyperledger is an open-standard, decentralized public ledger based on Blockchain technology to advance worldwide business. It is a cross-industry collaborative effort to create a Blockchain-based open standard for the distributed ledger for globally conducted business transactions.

The goals of Hyperledger are mentioned below:

Built by a growing community of communities who build differentiated approaches to business Blockchain frameworks such as Hyperledger Indy, Iroha, Fabric, etc.

Ordinarily worked for one structure, and through normal permit and network of networks approach, ported to different systems. The apparatuses incorporate Hyperledger Composer, Cello, and Explorer.

Steps in the working process of Hyperledger:

Since various enterprises and districts may run their own systems, diverse systems may need to send distinctive accord calculations to fit their utilization situations. Agreement calculations under the Hyperledger convention must be pluggable, enabling clients to choose their preferred consensus algorithm during deployment. The Hyperledger protocol will give an execution of Byzantine Fault Tolerance (BFT) in its underlying discharge, utilizing the PBFT.

The client endorsers are dedicated per chain code. Chaincode is a bit of code that gives you a chance to connect with a block shared ledger. The consensus service such as ordering for the endorsed transaction. The contract and system auditors perform auditing and consensus service at the system, user, and contract levels.

Setting up Channels, Policies, and Chaincodes

Depending on the business network, one or more channels may be required. To make a channel, send a design exchange to the requesting administration indicating individuals from the channel, ACL strategies, anchor peers. The genesis block of the channel becomes a part of the configuration. It notifies the members to join the channel wherein multiple channels can be joined by a peer. Deploy chaincodes on the channel with an appropriate endorsement policy. Now, the network is ready for transacting. 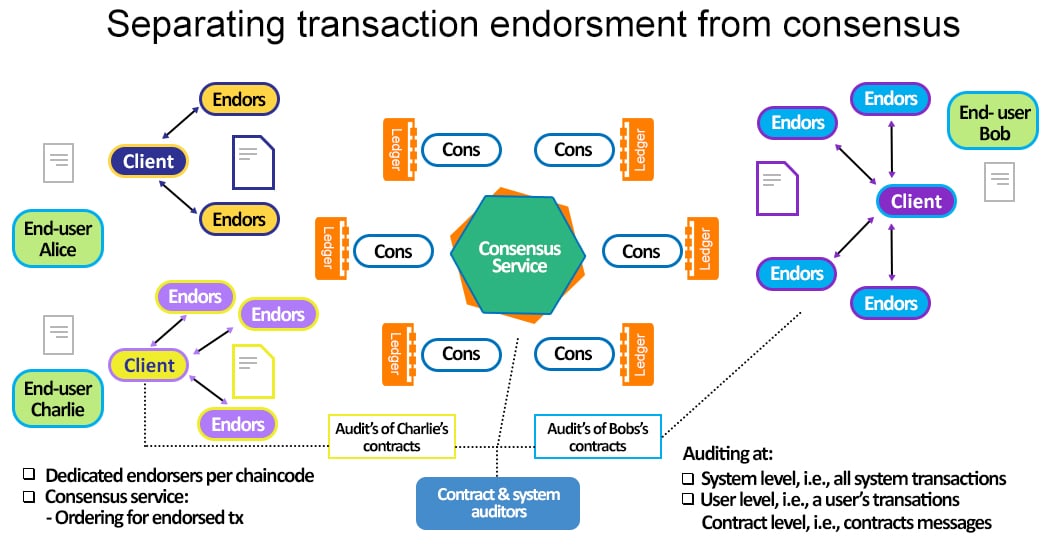 The transaction endorsement is a testimony of the outcome in a signed response manner. As part of the endorsement policy, it includes all the needs of the transaction which are acceptable to all the stakeholders and could be implicit or explicit.

There are two-member and n-member networks, with a seven-step transaction process:

Indy offers some unique features, including the below-mentioned ones:

The name ‘Iroha’ is ‘the most basic element of all,’ and it highlights a basic development; modern, area-driven C++ outline, accentuation on mobile application improvement, and another, chain-based Byzantine fault-tolerant consensus algorithm, called Sumeragi.

Iroha’s most important features are as follows:

Hyperledger Fabric is designed by IBM. It is a private Blockchain and the most successful and popular project of Hyperledger. Similar to other Blockchain technology, Fabric has a ledger, smart contracts, and a system, by which participants can manage their transactions.

The most important features of Fabric are as follows: