Home / Tutorial / What is Blockchain Mining?

What is Blockchain Mining?

In this part of the Blockchain tutorial, we shall focus on Blockchain mining. We will understand its complete definition, importance, and where it is used, inception story, types of bitcoin mining, how you can mine bitcoins, and various processes that are centered around mining bitcoins. Read on!

What exactly is Blockchain mining?

A peer-to-peer computer process, Blockchain mining is used to secure and verify bitcoin transactions. Mining involves Blockchain miners who add bitcoin transaction data to Bitcoin’s global public ledger of past transactions. In the ledgers, blocks are secured by Blockchain miners and are connected to each other forming a chain.
When we talk in-depth, as opposed to traditional financial services systems, Bitcoins have no central clearinghouse. Bitcoin transactions are generally verified in decentralized clearing systems wherein people contribute computing resources to verify the same. This process of verifying transactions is called mining. It is probably referred to as mining as it is analogous to mining of commodities like gold—mining gold requires a lot of effort and resources, but then there is a limited supply of gold; hence, the amount of gold that is mined every year remains roughly the same. In the same manner, a lot of computing power is consumed in the process of mining bitcoins. The number of bitcoins that are generated from mining dwindles over time. In the words of Satoshi Nakamoto, there is only a limited supply of bitcoins. Only 21 million bitcoins will ever be created. 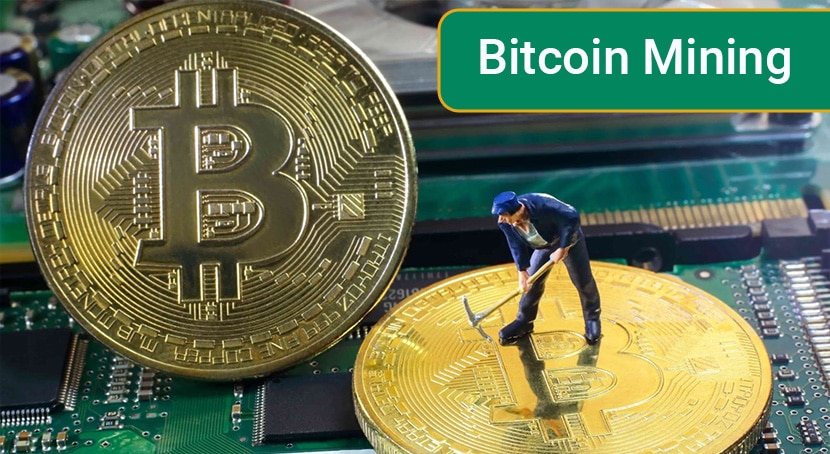 At its core, the term ‘Blockchain mining’ is used to describe the process of adding transaction records to the bitcoin blockchain. This process of adding blocks to the Blockchain is how transactions are processed and how money moves around securely on Bitcoins. This process of Blockchain mining is performed by a community of people around the world called ‘Blockchain miners.’
Anyone can apply to become a Blockchain miner. These Blockchain miners install and run a special Blockchain mining software that enables their computers to communicate securely with one another. Once a computer installs the software, joins the network, and begins mining bitcoins, it becomes what is called a ‘node.’ Together, all these nodes communicate with one another and process transactions to add new blocks to the blockchain which is commonly known as the bitcoin network. This bitcoin network runs throughout the day. It processes equivalent to millions of dollars in bitcoin transactions and has never been hacked or experienced downtime since its launch in 2009.

The process of mining can get really complex and a regular desktop or PC cannot cut it. Hence, it requires a unique set of hardware and software that works well for the user. It helps to have a custom set specific to mining certain blocks.

The mining process undertaking can be divided into three categories:

When mining is done by an individual, user registration as a miner is necessary. As soon as a transaction takes place, a mathematical problem is given to all the single users in the blockchain network to solve. The first one to solve it gets rewarded.

Once the solution is found, all the other miners in the blockchain network will validate the decrypted value and then add it to the blockchain. Thus, verifying the transaction.

In pool mining, a group of users works together to approve the transaction. Sometimes, the complexity of the data encrypted in the blocks makes it difficult for a user to decrypt the encoded data alone. So, a group of miners works as a team to solve it. After the validation of the result, the reward is then split between all users.

Cloud mining eliminates the need for computer hardware and software. It’s a hassle-free method to extract blocks. With cloud mining, handling all the machinery, order timings, or selling profits is no longer a constant worry.

While it is hassle-free, it has its own set of disadvantages. The operational functionality is limited with the limitations on bitcoin hashing. The operational expenses increase as the reward profits are low. Software upgrades are restricted and so is the verification process.

Curious to know the Blockchain Interview Questions and Answers for 2022?

How can you mine bitcoins?

You can buy and trade for bitcoins, or you can mine them. For mining bitcoins, users are rewarded in bitcoins. This mechanism forms the pivot around which the bitcoin economy revolves. While the cost and difficulty of mining bitcoins individually continue to increase, several cloud-based mining services have gradually emerged. These services allow individual users to lease the processing power of mining equipment and mine bitcoins remotely. However, you can mine bitcoins in person too.
Read more: Check out our blog on Blockchain developer salary!

Mining Bitcoins on your own

To secure the transaction network, bitcoin miners work together. With more users mining the blockchain, blockchain network security increases. Network security ensures that there are no fraudulent activities happening with cryptocurrencies.

Sounds interesting? You can check the offers for an online Blockchain training course or get back to other topics in this Blockchain online tutorial.

Now that we have shared with you how to mine bitcoins, why don’t you give it a shot?

2 thoughts on “What is Blockchain Mining?”

What is Blockchain Mining?