What is Blockchain Explorer?

An online tool, Blockchain Explorer is designed and devised to view all the information associated with blocks, addresses, and past and current transactions on a Blockchain. These online tools generally provide useful information such as network hash rate and transaction growth indexes.

Many people, even those who are familiar with cryptocurrencies, do not essentially understand the value which is inherent in a Blockchain Explorer. There are many things, however, that can be done and found when we leverage the capabilities of a blockchain explorer.

The first transaction in any block within a Blockchain is the income that is earned by respective miners. Other transaction details shed light on where the Bitcoin has been sent or received and whether there are any associated network fees. These insights might be useful for computing and analyzing the network fees that you have paid. Several blockchain explorers also report unconfirmed transactions and whether mining difficulty is increasing or decreasing. These details may be leveraged to predict network congestion and the possibility of rising fees.

While the term ‘Blockchain Explorer’ indicates that tools of this are only useful for looking at block information, there is a lot more to them. Blockchain explorers can be used to search for specific transaction IDs or wallet addresses, demonstrating their efficacy in investigating personal transactions when there is a need. Furthermore, there exists other blockchain explorers who possess tools for reporting on network statistics and providing visualization charts for instruction optimization.

Note: You need a blockchain Explorer which is specific for Cryptocurrency or Blockchain. You cannot, for instance, track Bitcoin transactions with a Litecoin Explorer. You need a Bitcoin Explorer for doing so.

Why Use Blockchain Explorer?

On the surface, general blockchain explorers seem to generate a myriad of confusing data when someone is relatively new to cryptocurrency. A lot of data that is provided on the screen by the Blockchain Explorer does not make sense at first, but eventually, when a user gets a better understanding of how to read those data sets, things quickly start to fall in place, and the Blockchain Explorer becomes their personal assistant in the world of Blockchains and Cryptocurrency.

For instance, when a new bitcoin block is discovered by miners, each blockchain explorer would list it the very moment it gets added to the network. By clicking on a specific network block, users can garner insights into the size of the block, its discovery information, and most importantly the transactions that the block contains.

A Bitcoin Blockchain explorer may also turn out to be a tool of great value when a user wants to see how current block rewards are distributed to miners who helped in solving the block’s hash code. Although this information may not be vital to everyone, it is an optimal way to see how bitcoins are generated by mining and the way in which they are distributed.

Depending on the type of bitcoin blockchain explorer one uses, additional features also pop up. Blockchain.info, for example, has become much more than just a Bitcoin Blockchain Explorer. It provides statistics and charts pertaining to the bitcoin network.

Check out this What is Ethereum video by Intellipaat:

With an efficient blockchain explorer, you can essentially:

Let us now try to discern a real-time use case for blockchain explorers.

How Does A Blockchain Explorer Work?

This is the homepage of Blockchain.com, one of the most popular Blockchain Explorers. The first thing that needs to be understood is that Blockchain Explorer is a Graphical User Interface (GUI), that helps one navigate Blockchains. The above image gives a representation of high-level data regarding the Bitcoin Blockchain. Some of the notable details on the front page include a daily number of transactions, transaction volume, estimated hash rate, and price.

Added to that, there are charts with detailed price mapping and mempool size. The bottom part of the explorer’s interface focuses on monitoring blocks and transactions. Let’s now understand the working of Blockchain, exploring its components:

This component represents an aggregated USD price feed across different markets. You can select your default currency by clicking on the drop-down button. In many cases, the price factor is directly related to the feed’s provider without any indication of spot prices.

This part of the Blockchain.com homepage represents the different unique transactions carried out in the course of the last 24 hours. These transactions must be in a validated block for confirmation.

The estimated hash rate is generally perceived as the proxy for security in a Proof of Work (PoW) Blockchain. The Blockchain explorers also offer a visual representation of the predictions for computing resources implemented by Blockchain miners.

This component helps you in tracking the aggregate size of transactions, generally in bytes, awaiting inclusion in a specific block. It can also showcase the fees needed for faster confirmation of transactions.

It represents the overall value of outputs that have been confirmed on the Blockchain in the recent 24 hours.

It’s an estimate of actual transaction volume shifted among unique wallets. It’s calculated as the difference between transaction value and output estimate returning to the spending wallet as change.

It’s one of the most functional factors within the Blockchain explorer. The latest blocks feature helps in outlining the confirmed blocks, beginning from newest to oldest. It also offers information on blocks, timestamps, block size, and block height.

The entire concept of Blockchain Explorer surfaced alongside Blockchain technology. It was the solution that was derived to resolve difficulties in investigating Blockchain for transactions. For example, to verify whether a person’s claim of sending cryptocurrencies is true or not. In some cases, those transactions might have been stalled or rejected in the first place.

On top of this, navigating Blockchains is difficult due to differences in data formatting. Blockchains store data in an organized way that is properly indexed and in grouped format. There was always a need for special software to ensure better accessibility and readability of the information on Blockchain.

The available option at that time was using the Command-line interface to explore information about Blockchain transactions. However, professional programming expertise is required for exploring Blockchain information in such a way. Therefore, an easy-to-use graphical user interface is necessary for Blockchain navigation for the usability of Blockchain platforms.

The first thing on the website will be the homepage and a few other elements. On the left side of the header section, there is a CoinMarketCap logo, which can be used to come back to the homepage anytime by clicking on it.

You can also change the language by clicking on the drop-down button on the right side. There is a small search bar that is present next to it, which helps in searching for Bitcoin Blockchain components. It can be switched to a different Blockchain like Ethereum or Litecoin, just by clicking on the icon.

The main search bar is the perfect place to look up something specific right away. Being a Blockchain Explorer user, you can search these items:

The search bar is by default set to Bitcoin Blockchain, you can set it to Ethereum or Litecoin Blockchains by clicking on the dropdown arrow. One of the most common use cases of Blockchain explorers is to check the transaction status. It can be done by copying and pasting the transaction ID into the search bar. It can also be used for confirming whether the cryptocurrency they expect has arrived or not to their wallets. The block explorer displays the address and all its recent transactions that have been carried out to and from that address.

Essential market data factors are listed below each crypto that will provide the cryptocurrency’s value and size. This information helps investors and analysts understand the coin’s current performance. The market Cap factor shows the total value of the particular cryptocurrency or its relative size compared to another cryptocurrency.

The Circulating Supply takes into account the total coins or tokens that are being traded on exchanges and held in the hands of the public. Max Supply is defined as the best approximation of the maximum number of coins that can exist in a specific cryptocurrency. Hash Rate measures the computing power being consumed by the network to operate a particular blockchain. These are measured in KH/s, MH/s, TH/s, GH/s, EH/s, or PH/s, depending on the number of hashes produced per second. 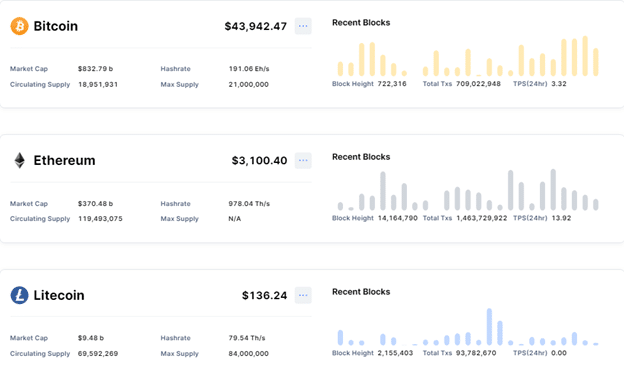 Recent Blocks or recent groups shown by blue and yellow graphs represent the confirmed transactions recorded by Bitcoin and Ethereum Blockchains. This view of the blocks is constantly updated, with the size being proportional to the number of transactions. The taller the graph, the more transactions are completed.

If more information is required on a specific block, the best way is to point the cursor over three dots and click on “View Blocks”. Upon clicking a block height, one can see all the transactions contained in the block.

If by chance one leaves the homepage, to find the block transactions, making use of the small search bar located on the top right-hand side of the page is a good way.

One can take a closer look at the Bitcoin data, and select the “Transactions” tab to see individual transactions within their associated blocks. Transactions here are referred to as the act of sending and receiving cryptocurrency. Each transaction ID (also known as TxHash, TxID, Hash ID, etc.) is generated by a hashing algorithm according to the information contained within a particular transaction.

These Hash IDs are digital proof of payment. Altering any information within will change the Hash ID, and it alerts the users that the data has been tampered with. Crypto recipients check the transaction status by looking up the Hash ID to confirm whether cryptos have arrived or not.

Block Rewards are given to miners, who play the most significant role in the entire Blockchain ecosystem. Miners globally compete with each other to be the first ones to solve cryptographic puzzles and produce Proof-of-Work. During this process, they verify transactions to ensure that the BTC hasn’t been spent elsewhere. The Miner who solves first will receive the Block Reward. Other miners validate the solution produced by the first miner, and so they reach a general consensus on the data present in a Blockchain. This Block Reward helps in serving as an incentive for miners to continually verify the transactions and help keep the Blockchain updated and secure.

Later, you can check out our offers for Blockchain training to achieve certification. It will help to excel in your career. Also, Intellipaat is providing free Blockchain interview questions & answers listed by the experts to prepare for the interviews.