Home / Tutorial / What is Ethereum Blockchain?

What is Ethereum Blockchain?

An open-source, public, and blockchain-based distributed computing platform and operating system featuring a smart contract functionality, Ethereum enables distributed applications to be built and executed without any downtime, fraud, control, or interference from a third-party entity. Ethereum is not just a platform but also a Turing-complete programming language running on a Blockchain that helps developers publish distributed applications.

‘Bitcoin is first and foremost a currency; this is one particular Blockchain application. However, it is far from the only application. To take a past example of a similar situation, e-mail is one particular use of the Internet, and for sure helped popularise it, but there are many others,’ says Dr Gavin Wood, Ethereum Co-founder.

Learn about the important terminologies in our blog on Ethereum Cheat Sheet!

What Does He Intend to Say? 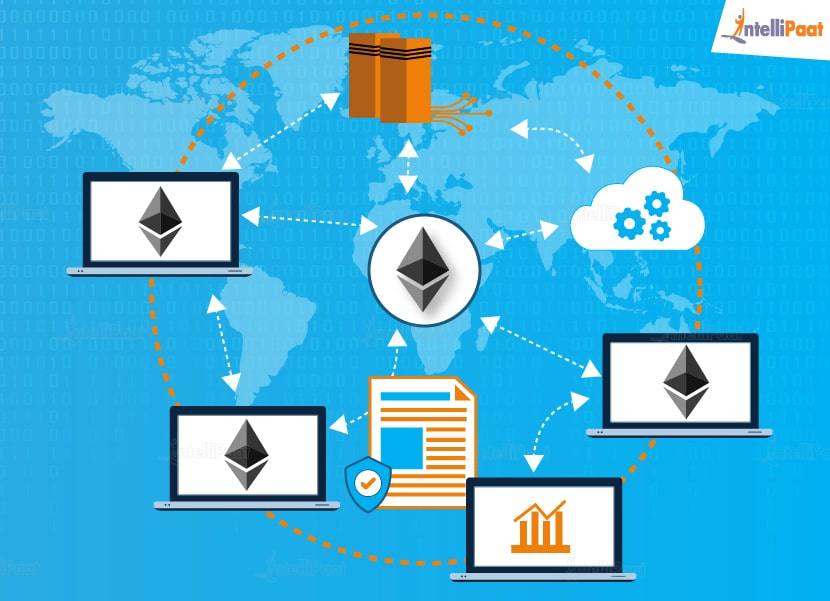 Not only being meant to transfer funds on blockchains, but Ethereum also has a plethora of applications. Ether is a cryptocurrency whose blockchain is generated on the Ethereum platform. Ether can be transferred between accounts for compensating participant mining nodes for the computations they have performed. As an altcoin, ether has slowly carved a niche for itself in the blockchain domain. Flexibility being at its core, ether is a cryptocurrency that needs no introduction. Wherever there is a need to establish a channel between, participating nodes in a blockchain transaction, ether is your go-to cryptocurrency. Also, Ethereum provides a decentralized virtual machine, the Ethereum Virtual Machine (EVM), which can be leveraged to execute scripts using an international network of public nodes. The virtual machine’s instruction set, as opposed to other blockchain applications, is assumed to be Turing complete.
Moreover, within Ethereum, there is a second type of token that is used to pay miners fees for including transactions in their block. This token, ‘gas’ is an internal transaction pricing mechanism used to mitigate spam and allocate resources on the network. Every smart contract execution on Ethereum requires a certain amount of gas to be sent along with it to entice miners to put it in the blockchain.

Wondering how to manage your Ethereum? Have a look at our blog on the Best Ethereum wallets in 2021!

Any service which is centralized initially can be decentralized using Ethereum. From services like loans to their intermediary counterparts, Ethereum can revolutionize thousands of processes that exist across different industries and verticals. Now think, if all of them get decentralized, how secure and efficient would every aspect of human existence become?
Ethereum can also be used to build decentralized autonomous organizations (DAOs). Fully autonomous, and decentralized organizations with no single leader, DAOs are operated by programming codes, on a collection of smart contracts written on the Ethereum blockchain. A DAO is owned by everyone who purchases tokens. However, instead of each token equating to equity shares and ownership, they act as contributions that give people voting rights for a consensus.

Ethereum has recently created a new standard. Termed the ERC-721 token, this standard is used for tracking unique digital assets. A major use case for these tokens is digital collectibles. The infrastructure of these tokens allows people to prove ownership of scarce digital goods.
No doubt, Ethereum will continue to prove its mantle in the marketplace as it has been doing since it first came to public sight.
Next, find out about the Blockchain training offer from Intellipaat. Get certified to excel in your career.

Curious to know the Blockchain Interview Questions and Answers for 2022?

2 thoughts on “What is Ethereum Blockchain?”

What is Ethereum Blockchain?