This module focuses on blockchain cryptocurrency—their origin, importance, and concepts. In addition, we will learn about how cryptos work in real time and how blockchains are applied to manage them.

What do you mean by Blockchain Currency?

Before understanding how blockchain and cryptocurrency twin together, let us first brief you about the precepts of cryptocurrency.

What exactly is Blockchain Cryptocurrency? 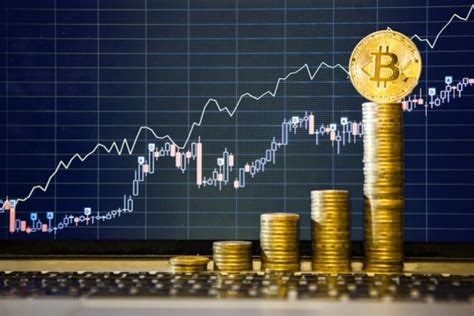 With the advent of blockchain currency, it became possible to create something that is not possible to be duplicated and can be sent directly from one person to another. These transactions do not require a trusted third party, organization, or computer server in the middle that serves as the source of trust.
The supply and value of cryptocurrencies are controlled by the activities of their users and highly complex protocols which are built into governing codes. In particular, the activities of miners—cryptocurrency users who anchor sophisticated computing functions to record transactions and receive newly created cryptocurrency units and transaction fees—are critical to the stability and smooth functioning of cryptocurrencies.

To know how you can use this Blockchain Currency to your advantage, enroll now in Blockchain Training in Bangalore.

Following is a detailed diagram of how cryptocurrencies work in real-time. 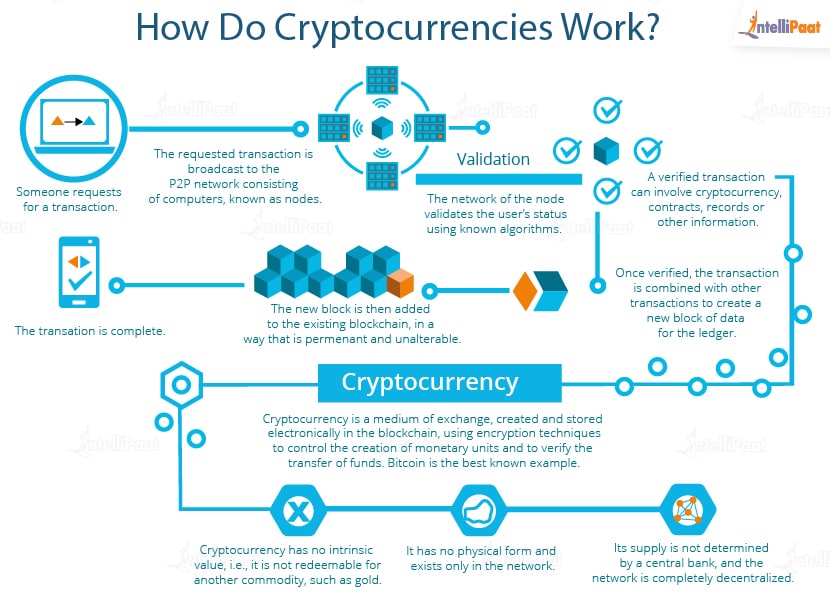 How Do Cryptocurrencies Work?

The most striking difference between blockchain currency and physical currency is the fact that blockchain cryptocurrency uses a decentralized system for controlling transactions as opposed to centralized digital currencies and central banking systems. This decentralized feature is based on a distributed ledger technology which is typically a blockchain that serves as a public financial transaction database.
So, what do we understand from this?

Blockchain and Cryptocurrency are not the same, as they have been referred to historically!

While blockchain currency is a mode of online transactions, blockchain is the technology underlying it. Blockchain drives the whole concept of cryptocurrency. It is interesting to note that blockchain was designed to manage cryptocurrencies. Blockchain simply stores data on a distributed ledger.

Different blockchain projects aim to store different types of data on their blockchains, from real estate details to contracts, and, of course, to virtual currency values. Cryptocurrency is just another type of data that can be stored on a blockchain.
PS: As a matter of fact, Bitcoin Blockchain—the most popular type of blockchain cryptocurrency—was the first implementation of blockchain currency.

It has a finite length containing a finite number of transactions that eventually surge in due course of time. Identical copies of the blockchain are stored in every node of the cryptocurrency’s software network. This network of decentralized server farms is managed by tech-savvy individuals or groups of individuals known as miners. Miners continually record and authenticate cryptocurrency transactions. 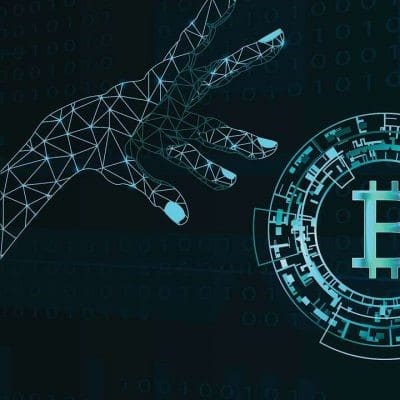 A blockchain currency transaction technically isn’t necessarily finalized until it has been added to the blockchain. Once the transaction is finalized, it is usually irreversible. Unlike traditional payment processors, such as PayPal and credit card modes of transactions, most cryptocurrencies have no built-in refund or chargeback functions.

During the lag time between the transaction’s initiation and finalization, cryptocurrency units cannot be used by either party. They are held in a state of freeze-down for all intents and purposes. Blockchain thus prevents double-spending or the manipulation of cryptocurrency code to allow the same currency units to be duplicated and sent to multiple recipients.

While cryptocurrency transactions depict security, there are certain aspects that question the authenticity of their existence. To mitigate these allegations of authenticity, there was a need to develop a foolproof technology that would not only make online cryptocurrency transactions safe but also construct an impregnable firewall through which hackers can’t penetrate.

This is where the blockchain took the center stage. Apart from providing a secure platform, blockchains also ensured that transparency is the key to all cryptocurrency transactions.
With blockchains, any person on the Internet can have a sneak of transactions that have happened on a cryptocurrency unit since its inception. This allows users to transparently traverse through transactions. Also, the ledger can be copied onto every computer in the world. This means that there exists no centralized place which a hacker can leverage to tamper with transactional data.
Assume that hackers became successful in doing that. Still, they won’t be able to change any of the previous blocks of transactions as all these blocks are knitted with each other in a chain in perfect order of cryptography. Any bitcoin transaction that ever happens is walled off and grouped together into blocks within 10 minutes of its successful completion.

Each block contains a hash code that links it with its previous block, thereby making the whole blockchain system tamper-proof. If any information is tried to be changed within a block, the block will generate a new hash code, signifying what is the original data in the block and what is not.

You might be wondering, where do these bitcoins and blocks even come from in the first place?

Remember that a block is simply a collection of transactions that are grouped into a whole and labeled as a block. Each block is generated after a certain period which is referred to as block time. The bitcoin block time is 10 minutes, and other blockchains can have different block times.
But, what about bitcoins and cryptocurrencies? Where do they come from?
In the case of bitcoins and most cryptocurrencies, they are created through a process called mining.
We shall discuss more mining in the following modules of the Blockchain tutorial. Further, find the best offer for getting Blockchain certification through our online courses.

Also Read: Best Ethereum Wallets of 2023 to manage your ETH